Ingmar Bergman’s The Virgin Spring stands as something of an anomaly in his career—one of the few films he directed but did not write. Yet despite this outlier status, the film feels much of a piece with Bergman’s other work, particularly that series of features beginning with The Seventh Seal and ending with The Silence. These works each deal explicitly with either existential or theological questions, The Virgin Spring focusing especially on the latter.

A beautifully realized tragedy, the film follows a 13th century farmer, Töre (Max von Sydow), and his household in the lead up to and their actions in response to the brutal death of Töre’s teenaged daughter, Karin (Birgitta Pettersson). The family themselves are devout Christians, with Töre’s wife Märeta (Birgitta Valberg) practicing a punishing form of asceticism. The woman’s harshness extends to others as well, most notably her housemaid Ingeri (Gunnel Lindblom). Such ill treatment drives the servant to call upon the Norse god Odin to punish the beautiful and flirtatious Karin. However, Karin’s rape and murder come as an unexpected shock—rather than answered prayer—to Ingeri, who eventually leads the stricken parents to the body after they have exacted vicious revenge on the killers. The film culminates with a heart wrenching prayer, followed by a glorious miracle. 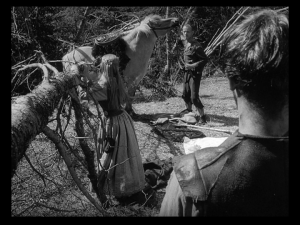 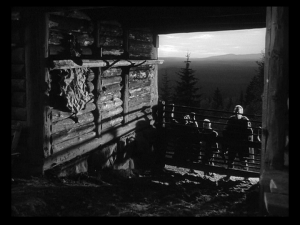 Only in the final moments, when Töre awkwardly collapses in front of the stream, do we get any real sense of freedom of movement. The stream bubbles across and away from Töre into a grove of trees. Töre’s body crumples to the ground as the weight of his daughter’s death presses him downward. Bergman even adds a sound element—the chirping of birds—to bring an openness to the final sequence. 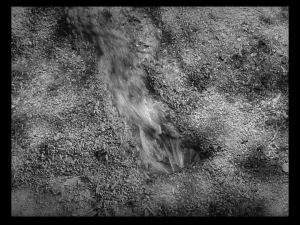 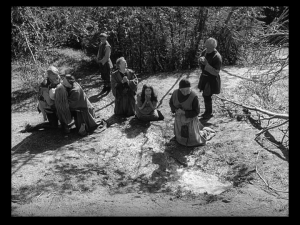 The penultimate visual testimony to freedom comes as the spring breaks free from the gravelly ground and rushes down the slight incline, in and among the members of Töre’s household. As the camera frames this small group of witnesses from above, each of them in a posture of reverence, they again look confined against the landscape. But they are also being viewed from above, and seem to see beyond their immediate context, visual hints at an even greater openness and freedom beyond physical sight.