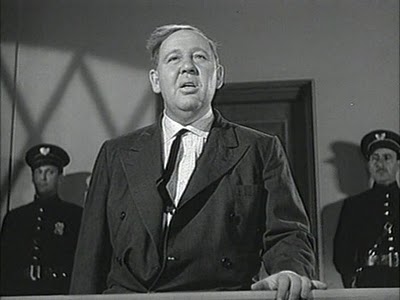 When a movie engages in propaganda, we see in it a power play, often a desire on the filmmaker’s part to bend the audience member’s opinion through dishonest and/or manipulative means. We see this most regularly in religious films, and widely in war or politically-themed works (think Riefenstahl’s Triumph of the Will). Jean Renoir’s 1943 wartime film, This Land Is Mine, has been called “propagandistic” with a screenplay that consists of “pure jingo” from no less a critic than the estimable Dave Kehr.[1]

And yet, despite a personal aversion to such tactics, This Land Is Mine offers a surprising dose of humanity in its brisk 103 minutes. This is due in no small part to Renoir’s gentle, even playful, touch with a number of the characters, making them more people with opinions and tendencies rather than mouthpieces spouting hard and fast ideology. The German Major von Keller, for instance, plays against the typical Nazi type, a man preferring to negotiate with and persuade the occupied instead of dominating them with a brash show of force. Von Keller remains evil—perhaps appearing even moreso with his gentler ways. In this spirit, von Keller’s most effective weapon turns out to be a flower, rather than a gun.

Laughton’s Albert Lory serves as the prime example of Renoir’s deft handling of his characters. To merely recount the arc of this character would lead one to affirm Kehr’s casting the screenplay into the classic Hollywood jingo-bin. However, while the character undergoes a remarkable transformation in an absurdly short amount of time, the film and the performance are so compelling that the abruptness of the transition is lessened.

Ultimately, the sequence that makes the film work appears in the film’s final third, as Lory offers two speeches in the courtroom that bookend a crucial few moments in his cell. None of these scenes will win awards for their distinctively cinematic qualities, but small and significant touches work to visually play off of the more straightforward ideas in the script. Most significant among these are the abrupt cut away from Lory’s friend Professor Sorrell, just before the latter’s execution. Renoir leaves him in mid-wave, effectively cutting off our last view of the great man too quickly. The cut serves to heighten our loss of this admirable character, one cut down far too soon.

Further, in Lory’s second courtroom address, immediately following the execution, Renoir alternates his camera between a medium shot of Lory himself and the faces of those in Lory’s hearing. This effectively minimizes the focus on the star—who, by the way, brilliantly delivers the speech—and places the “audience” in the midst of a dialogue of sorts—those who are hearing the speech and will have to respond to it.

This interplay between word and image doesn’t allow the film to avoid its propagandistic label—or the naïve liberalism of the final, anti-climactic classroom scene. But with his focus on faces, witnesses to this persuasive speech, Renoir injects something universally human into the proceedings—the portrait of a weighty choice: how to respond to the often conflicting messages and feelings we receive and have during our most trying times.