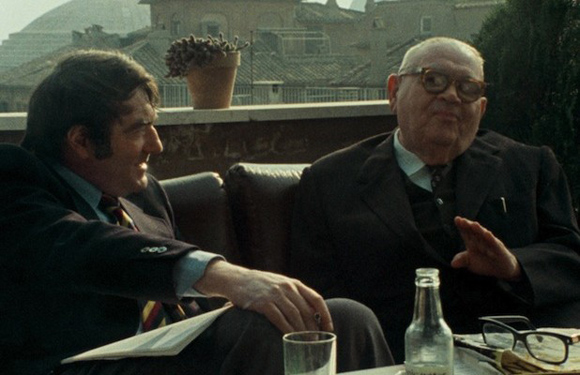 I had a provocative moment during my viewing of Claude Lanzmann’s The Last of the Unjust, his portrait of Benjamin Murmelstein, former elder of the Jews at the Theresienstadt ghetto in 1944-45. Early on in the film, Murmelstein tells Lanzmann: “you have convinced me our conversation is important.” For decades, Murmelstein had been reluctant to speak about the past, due, no doubt in part, to the pain it brought as well as the controversy his own role raised. At the moment just after Murmelstein uttered the above quotation, the disc in my DVD player simply froze without explanation. I couldn’t turn off the player. I couldn’t eject the disc. The image of Murmelstein’s frozen face—before he could really tell his story—lit up my living room. Maybe, this pregnant pause seemed to ask, the past is better left in the past?

Once I got the film restarted, I carried that question with me throughout Lanzmann’s extensive, more-than-three-hour interview with Murmelstein. Seeing as Lanzmann recorded the interview in 1975, the film seemed to pose the same question at a formal level as well. Numerous times throughout the film, Lanzmann’s camera or even Lanzmann himself introduces or interrupts the historical interview, instead wandering through the clean streets, emptied rooms, and beautiful synagogues that once bore witness to innumerable terrors. These places now carry largely unnoticed markers of remembrance, if anything at all.

The film shifts between old footage and new—most directly in the old footage of Lanzmann compared with the recent footage of Lanzmann—visually and formally mark history itself as a character. Indeed, as we try and suss out an honest response to Murmelstein’s admittedly fascinating stories of working for Holocaust organizer Adolf Eichmann and running the Theresienstadt ghetto, Lanzmann’s film foregrounds the question of historical perspective.

The film does this by taking this controversial “middle man” of the Holocaust era and giving him the dominant voice in the film. Lanzmann doesn’t seek to set up “gotcha” moments, but generally sits quietly as Murmelstein meanders through his tale. Indeed, Murmelstein’s gift of gab is apparent, even as he tends to, at times, drift far from his original point with asides and contextualizing. Lanzmann occasionally questions him, but those questions usually mean to clarify rather than challenge or debate.

The resulting film is masterful as the singular voice of Murmelstein plays off of the contrasting shots of past and present. Time passes. History accumulates. And Murmelstein’s voice resonates through it all. This combination suggests a question: How does time change the impact or estimation of that unchanging footage of a man from forty years ago? Hearing Murmelstein’s words—spoken in 1975—for the first time today reminds us of our distance from the past, as well as our difficulty of assessing the past in the present.

The specific reality of Murmelstein’s story is stark: He was the only surviving elder at Theresienstadt. The others suffered execution at the hands of their Nazi captors. Does his survival indicate a failure to protect his people or honor his identity? On its own his survival indicates no such thing. However, when we learn that Murmelstein followed Nazi orders to clean up the ghetto in order to make a show for the outside world that life in the ghettos was acceptable, skepticism about his explanations and reasoning takes root. Is this a man who would defend his personal interests at all costs?

Or maybe it’s more complicated than that . . . does Murmelstein’s personal interest align to a significant degree with the interests of the people, as he argues? The film is compelling precisely because Murmelstein’s claims cannot be easily cast aside. In this way, the film takes us into an issue, a time, and a character, giving us the opportunity to debate and wrestle with the claims we hear.

And it is that recognition that helps to answer my original question. Is the past better left in the past? Is history better left to history? My answer is unequivocal: no. We need history precisely for the purpose of entering into conversation about the whos, whats, and whens of our world. For it is in that debate that real community is forged and stabilized. Without important monuments and acts of remembrance that inspire conversation and debate—monuments and acts such as The Last of the Unjust—we will be left to powerful people wielding shadowy “truths” in the “service” of the people; we will find ourselves building and living and dying in modern-day Theresienstadts.