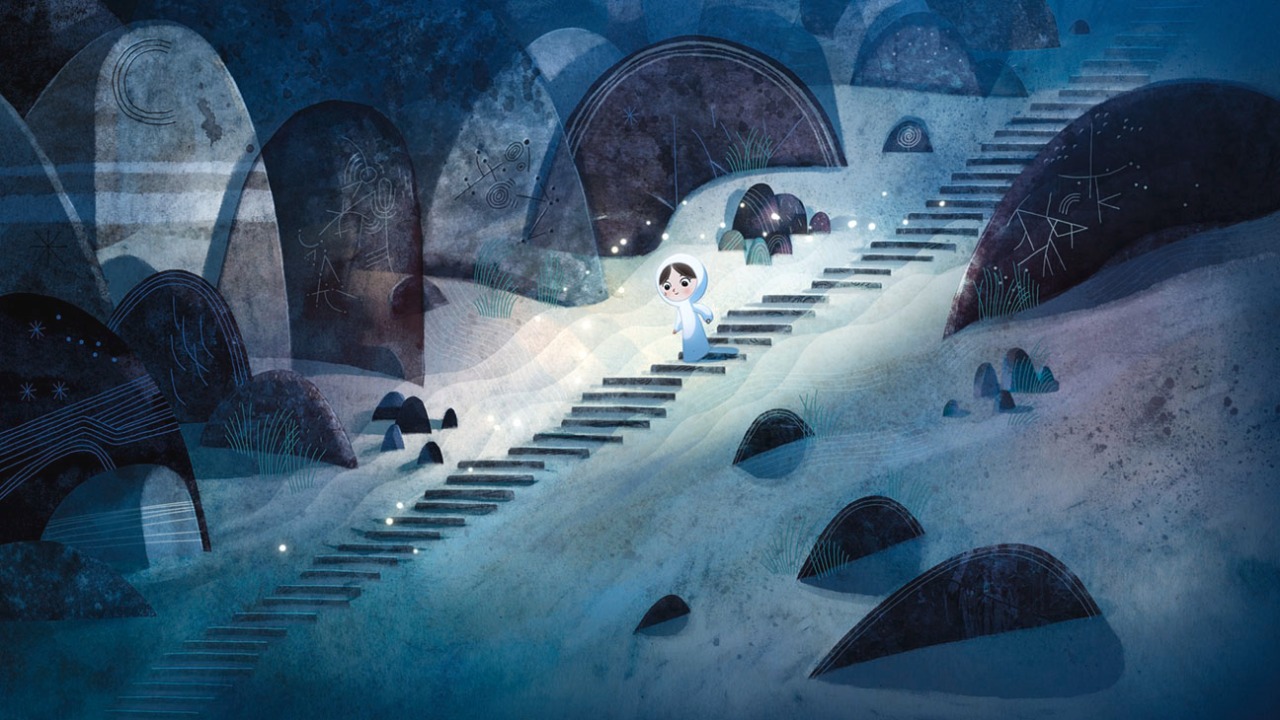 Song of the Sea, Tomm Moore’s follow-up to the beautifully animated Secret of Kells, begins with a memory. A mother, her belly swollen with baby, tucks her son, Ben, into bed just after giving him a special gift—a nautilus shell outfitted to play as a musical instrument. Though Ben’s mother dies that very night giving birth to his sister, Saoirse, he cherishes the shell even as six years pass.

The children’s father raises them in their lighthouse dwelling, but problems lurk just beneath the surface. Saoirse still hasn’t spoken a word by her sixth birthday. When her grandmother finds her washed up on the beach in the middle of the night, she decides to take the children from their seaside home to a “better” life in the city. However, Saoirse has a secret that she only just discovered herself, something she inherited from her mother: Saoirse is a selkie—human on land, but a seal in the sea. Removed from her natural habitat, Saoirse will die.

The threat of death coming to this little girl drives the action of the film, but it’s the death of her mother, which opens the film, that hangs heavy over the proceedings. Furthermore, as the children escape their grandmother’s home in the city and head back to the sea, death becomes an even more significant theme. The children—especially Ben—slowly awaken to the reality that their mother’s death is actually part of a much larger reality in the world—magical creatures such as selkies and fairies are dying at an alarming rate. Only Saoirse has the power to change the course of extinction for this magical world.

Death. Loss. Suffering. Grief. Creatures the world over have become acquainted with circumstances such as these. When the loss occurs with someone especially close—such as within the immediate family—coping can be a puzzling and altogether frustrating experience that leads to a life lived in fear of unknown dangers that lurk just beneath the surface of our otherwise controlled lives.

Indeed, this response of fear and control seems to be Ben’s typical (and natural) response to losing his mother. Though living on the seashore, he sees the ocean as a danger to be avoided—nothing more. Furthermore, anxiety plagues his relationship with Saoirse. Ben constantly expresses his concern that she might leave his sight, even to the point of attaching a leash to her so that she will not wander off.

And while Ben cherishes the gift from his mother—the nautilus shell that plays such beautiful, haunting, and mysterious music—the boy has lost all connection to the magic in the world that his mother would share with him through her stories and songs. In one scene, Ben scares Saoirse by telling one of his mother’s stories, only to proclaim that the story isn’t actually true. Death has removed the magic from Ben’s world. His vision of what’s possible in the world narrows. Fear takes the place of mystery.

The brilliance of Song of the Sea—without even mentioning its splendid 2D animation—is the way in which it gives Ben’s fear no quarter. Indeed, the story presents an approach to death and suffering that’s reminiscent of something poet Christian Wiman calls “mystery mastering fear.”[1] As Ben slowly awakens to the mystery and magic in the world—through his little sister, no less—he sees that so much more is possible than he could have ever imagined. As he recognizes his smallness, his finitude, he allows and even encourages his sister to use her gifts to bring freedom and renewal into the lives of many. Empowering others to be who they were made to be, the film seems to be saying, is the ideal response to death, for it is the only response that answers death not with limitations, but with life.