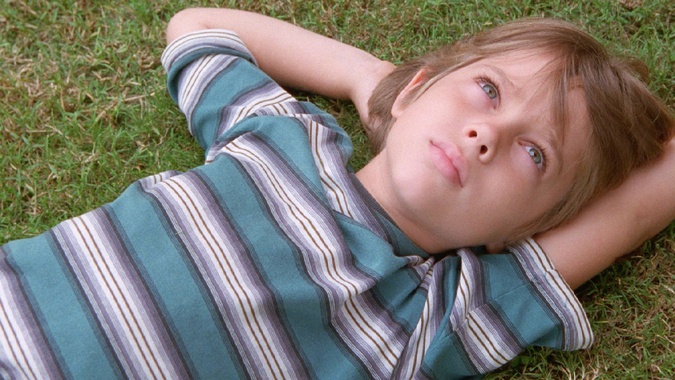 Richard Linklater has been making films for more than 25 years. And while his isn’t exactly a household name—despite his more popular collaborations with Jack Black (School of Rock and Bernie)—he has carved out a niche for himself in the world of American independent cinema with the seminal Slacker, the innovative Waking Life, and his affecting Before trilogy. Linklater’s most recent film, Boyhood, fits well into the ethos of those latter films. Heavy on dialogue and light on plot, Linklater’s “smaller” films privilege character, atmosphere, and ideas over story, events, and flashy set pieces.

Linklater’s work connects with the world in often profound and surprising ways. His films have regularly explored “people in time.” The Before trilogy is probably the best example of this as he has tracked Jesse’s and Celine’s relationship over the course of nearly 20 years—though we might also add the drama-in-real-time of Tape, along with sections of Slacker and Waking Life. Indeed, the middle entry in the Before trilogy, Before Sunset, is a film that virtually plays out in real time—the characters spending about 90 minutes together. Thus, that Linklater has played with time in a different way in Boyhood is hardly surprising.

My own interest in Boyhood tangentially revolves around this notion of time’s passage. While the film’s form—a series of twelve segments filmed over twelve consecutive years—clearly projects this particular thematic concern, the film isn’t simply interested in charting time’s passage. No doubt, this formal conceit is remarkable, as we see a boy go from six to eighteen in a little over two hours. However, it’s what the film wants us to do with the passage of time in the life of Mason and those around him that I find most interesting.

Every one of the film’s segments features Mason. Therefore, the action in each segment usually happens to or at least around Mason. In other words, Boyhood’s boy doesn’t initiate a great deal of the action—he most often receives it from his older sister, his parents, or his friends. While this could be criticized as a misstep, leaving the film with something of a blank slate for its central character, I think it works in a couple of important ways.

First, it feels realistic. Kids end up receiving far more than dictating the action of their lives. Parents take children places. Older siblings tell younger siblings what to do. Kids often simply go along with whatever their friends want to do. That Mason models these behaviors makes him more authentic as a character, and helps the audience get into the mindset of what it’s like to be a child.

Second, and more significant, however, has to do with my view that the Mason’s character embodies the way the film operates. The film opens with the image of the sky, as Mason watches the clouds roll by after school one day. The film closes with another scene of Mason gazing at the sky, this time a sunset in Big Bend National Park. Mason carries with him both an attentiveness to and an appreciation of the world around him. He is always watching, always seeking understanding, all the while refusing to judge and dismiss those people and events around him that are outside his typical experience or beyond his comprehension.

While Mason experiences frustration (generally directed at his father or stepfather), he never rejects. Even in one of the more painful sections of the film, as Mason deals with a break-up from his girlfriend, he can’t just dismiss her. He still remembers the good times they had and believes her to be, at heart, a good person.

Mason’s refusal to judge and dismiss people from his life seems to mirror the way Linklater approaches the primary characters in this film (especially Mason, Mom, and Dad). The director affords us the opportunity to observe these characters without him pushing us to dislike them because of their foolish behaviors or poor choices. Indeed, the film is at its weakest in scenes with the stepfathers, men we’ve no real connection to or sympathy with. As a result, these scenes feel stacked against those characters. Maybe this is by design, to place us in the shoes of the stepson thrust into relationships with these men. Regardless, those scenes stand apart from what is otherwise a consistent approach to characterization that takes people at face value—the good with the bad.

The overall lack of judgment toward its characters, taken in the spirit of Mason appreciating the world around him, is, in my view, one of Boyhood’s great achievements. It points out the value of appreciating people, experiences, and moments, and does so through the eyes of a child. Such a childlike vision of the world prompts us to be open and vulnerable to the world around us. It recognizes that such an approach will certainly yield pain, but not just pain. In the character of Mason, Boyhood gives us the eyes to see the beauty around us, to relish those moments of overwhelming grace or exciting opportunity that seize us and will not let us go. It is because of that spirit that I am most grateful for Boyhood.