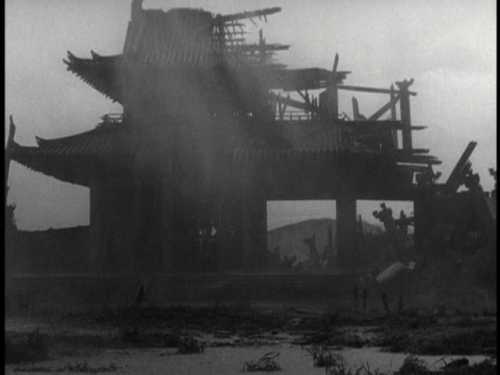 Akira Kurosawa’s first masterpiece, Rashomon, opens in the middle of a torrential downpour.  Two men huddle beneath an abandoned and deteriorating city gate. The imposing height of the gate offers a sense of the power that created it . . . and that power’s absence that has left it in disrepair. The two men, a poor woodcutter and a poorer Buddhist priest, mutter about their lack of understanding. Their confusion could easily be aimed at the sorry state of the world immediately around them, but when a third man approaches, we soon learn of the specific cause of their bewilderment.

The bulk of the film recounts the story at the source of their confusion—the rape of a young woman and the murder of her husband by a bandit. But what could have been a standard crime story set in medieval Japan becomes something special as Kurosawa takes the viewer through the same crime story multiple times, each according to the perspective of one testifying at trial. This multiplicity of views creates indeterminacy about what really happened that day in the forest. The opening shot the first time through the story—from the woodcutter’s perspective, he being a secret witness to the whole crime—is a tracking shot looking upward through the canopy of trees. As the sun darts behind leaves and then back out again, the stage is set for the confusion to follow.

The varying stories play out in not entirely unexpected ways, as each version tends to fulfill the storyteller’s best vision of themselves, undercutting whatever baseness may have inspired certain of their actions. In this we discover a great deal more give and take between the bandit and his two victims, each of them with opportunities to act freely at certain moments. However one comes down on what actually “happened” during the incident, Kurosawa uses the three men at the city gate retelling this story as his way of commenting on the proceedings. When faced with the complex problems of the world and a lack of certainty about “what happened,” where do these three men—representative of society as a whole—go from here?

For the priest, the story has called his faith in humanity into question. Once a believer in the essential goodness of people, he begins to understand through the retelling of these stories that humans have a propensity to lie. This fundamental weakness in humanity brings disillusionment for the priest, possibly even calling into question his own mission as a servant of something beyond himself.

The visitor, hearing all the stories for the first time, is the most cynical of the three. He questions the very existence of goodness at all, and seems to live according to this philosophy himself. This visitor believes that the only way to survival is through embracing our own selfishness. Thus, when the three men hear the cries of an abandoned baby in another part of the gate, the visitor quickly runs over, not to give comfort to the child, but to take its blankets for himself.

Finally we have the woodcutter. He is the prime example of weak humanity, initially telling a false version of the story to protect himself. However, the very fact that he told a false story once even calls into question his “authoritative” version at the film’s end. Is that how it actually happened? Who knows? And Kurosawa seems uninterested in solving that problem for the viewer. Instead, Kurosawa creates tension: this woodcutter is a liar on the one hand, but on the other, he reproves the visitor for stealing the baby’s blankets, and in the end, takes the baby home himself, to care for alongside his other children.

Rashomon’s greatness comes in its frank portrayal of the human situation: we are weak and uncertain creatures. What will we do in light of such circumstances? Will we pull back from the world, like the priest? Will we take whatever we can get, like the visitor? Or will we try to overcome our weakness and care for others, like the woodcutter? When the rain finally stops and the woodcutter walks off, baby in hand, it’s clear that Kurosawa’s heart is with the woodcutter, even as he knows the very existence of people like the priest and the visitor will continue to tempt us toward some lesser life.