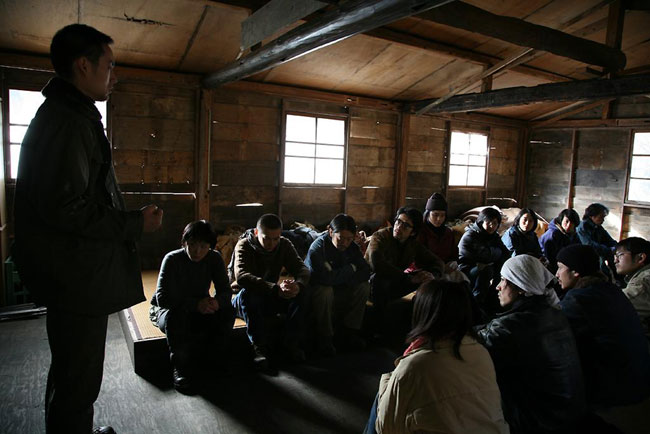 Films in the last decade, such as Olivier Assayas’ Carlos and the Green/Spiegel documentary The Weather Underground have tracked elements of the leftist movements of the 1960s and 70s. Another recent entry, United Red Army, follows the development of Japanese Marxist groups in the same period.

Kôji Wakamatsu’s film is primarily fictional, though in its dizzying opening half hour, it regularly mixes in found footage from a period of intense leftist uprisings. And while these scenes aim to bring context, for the uninitiated, the effect is more akin to an oncoming tidal wave than a deliberate accounting of the facts. In this, the film is quite effect at formally capturing the exhilarating spirit of these movements as they spread throughout Japan and the west.

As the film goes on, the settings become more focused, even insular. The film’s fictional dramatizations of events within two groups that join to form the titular URA take place primarily in mountain training centers, where talk about, rather than active, revolution dominates the proceedings. Where the early moments of the film were focused on marches, sit-ins, and even some bombings, as the early fervor wears off, the groups look forward to a long haul of effecting a revolution through planning and training.

Ironically, the film shines in what comes off narratively as a plodding middle act, precisely because it refuses to let up on the rigorous examination of this group slowly turning its attentions inward. Ostensibly the URA trained for revolution, but everything about their training was focused on themselves. As such, they began to lose a real sense of what they were fighting for.

The psychological complexity of this move is extremely well played by Wakamatsu, as the group begins to suffocate under the weight of its own expectations and increasingly delusional understanding of the requirements for revolution. A group looking to implement leftist ideals of fairness and equality, the URA eventually ends up being run as a dictatorship, the powerful personalities filling the void of leadership in the group. And when those people are paranoid hypocrites? Well, you can guess where it goes.

United Red Army effectively traces the psychological currents of an often misunderstood movement. From idealistic kids, the members of the URA—almost to a man—morph into isolated automatons, unable to stand up to the evil in their own midst.