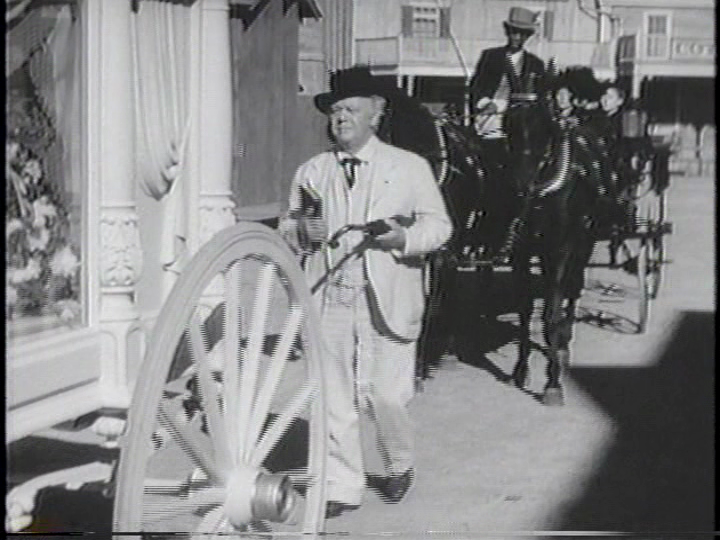 John Ford is generally known for his westerns starring John Wayne, the larger than life hero set against the backdrop of Monument Valley. However, Ford made a wide variety of films, some large and others small. And it was of these latter pictures that Ford once said, “My most beautiful pictures are not westerns; they are little stories without big stars about communities of very simple people.”[1] One of those “little stories” is The Sun Shines Bright, a film Ford made in 1953. Based on a series of stories by Irwin S. Cobb, the film follows a judge named William Priest and the many stories taking place in and around his town of Fairfield, Kentucky around the turn of the twentieth century.

The town, ironically named Fairfield, contains its share of racial injustice, long-term feuds, militant temperance unions, prostitution, and deep-seated family strife. The Judge—with something of a secret alcohol habit himself—stands as a sort of quiet, albeit active, witness to these troubles which in certain cases threaten the lives of innocent people.

The many threads of disunity and disagreeableness come to a head on Election Day. Judge Priest’s rival, Maydew, campaigns for the judge’s office, speechifying on progress and the beginning of a new age. The speech ends, however, when a white, horse-drawn hearse rounds the corner onto the main street of town. In its wake, we see Judge Priest, walking alone, in turn followed by a carriage full of prostitutes, appropriately wearing all black. The crowd around Maydew looks on with a curious, haughty gaze, one that is repeated often—both silently and through laughter—as the procession moves through town. The dead woman, long-since banished from her family for her loose ways, returned home already ill and begged for a proper funeral just before she died. The only ones to even hear, much less heed, her request were the outcasts of society: a group of prostitutes, a mortician, a black carriage driver, and, oddly enough, the popular judge.

Ford films the funeral procession for more than seven minutes. The rest of the film moves along at a brisk pace, with cuts coming quickly on top of one another. However, the duration of the shots lengthen considerably during this sequence, Ford indicating formally the importance of slowing down and taking in the events of this procession. As the group moves through the town, Ford cuts across the axis twice, making it seem as if the procession were criss-crossing all over town, up this street and down the next, everyone a witness, everyone accountable. Slowly, as the group winds its way toward its destination, one or two individuals here and there join the march—some the judge’s friends, others outsiders not in with the “respectable” townspeople. Ford films all of this nearly without words, placing the emphasis on the visual movement through the town, the judge keeping a stoic look throughout the march while the crowd becomes something of an arrow being shot through town. The people in the procession understand the significance of joining this march—by doing so they are aligning themselves with the “sinners,” recognizing their own culpability in making this town an unjust place to live.

The funeral procession eventually enters a poorer part of town, where the blacks live separately from the whites. And then it becomes clear—the funeral will take place in the black church, because the respectable white church won’t have them. An all-black choir greets the group with hymns outside their small church building, and the mourners file in to a plain room. Ford scholar Tag Gallagher describes it well, noting that the “casket and mourners funnel away from us and upward into the chapel. This, and the fact that inside the chapel is stony and cavelike, is appropriate for the goal of the symbolic journey. The blacks stand outside, not by custom of segregation, but because this is a ceremony of white penance. Priest’s sermon will transform public confession through absolution into redemption.”[2]Before the sermon is even preached, before the Word comes directly into the scene, we have before our eyes a visual presentation of the public’s admission of guilt, their desire to turn from their sins, and their entrance into the cave from which new life will come to the town. In the simplest of sequences, Ford masterfully uses the tools of the medium to illustrate the drama of redemption. It should come as no surprise, then, that in the last sequence of the film, another parade—this time in front of Priest’s home—a group walks by holding a sign—“He saved us from ourselves.”