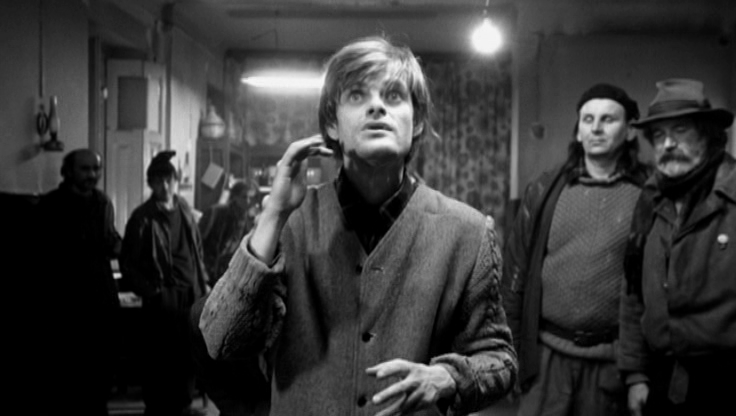 How mysterious is the Lord that he amuses himself with such strange creatures!  –Janos, Werckmeister Harmonies

Bela Tarr’s magnificent Werckmeister Harmonies offers a beautifully bleak portrait of the narrowness of modern life. The film opens with Janos in a barroom at closing time, prepared to illustrate for the drunken men the workings of the cosmos. Using the men as models, Janos shows them how the earth rotates around the sun while the moon at the same time orbits the earth. The scene’s oddity is strangely moving, as the single shot serves to unify the disparate group and strengthens the coherence of their actions. Tarr brings the camera both near and far, allowing us access to the men but also retaining the fundamental strangeness of the scene.

The simplicity of the scene endears the viewer to the men, yes, but more so to Janos. What kind of man would think up such a scheme? As the film follows Janos through his travels in the village over the following two days, we quickly discover a man captivated by a sort-of-circus that has come to town boasting the “largest giant whale” in the world. For Janos, this whale represents the creative possibilities of God (the quote above being Janos’ response to seeing the creature), and as such he encourages people to see it. Indeed, in the whole of the village, Janos seems to be the only one who actually sees the animal.

Janos seems to possess a quality that no one else has: reverence. When he sees something grand, he humbles himself before it. As such, we see him constantly on the move, serving other people, older people who he seems to respect and appreciate. Tarr’s typically lengthy “walking shots”—where a character or characters simply walk in an extended tracking shot—underline this fundamental aspect of Janos’ character: his reverence for the O/other has profound implications for how he lives his life.

That Tarr’s film ultimately illustrates the ways in which the abuse of power in the modern world—either through destructive riots or draconian rule—squelches such reverence makes the portrait no less beautiful. Indeed, the tragic ending draws us back to that opening sequence. As Janos directs the three drunken men in their “Dance of the Cosmos,” he suddenly stops them, the moon directly between the sun and the earth—an eclipse. Darkness has come, but only for a time, Janos tells them. The light will come again, and bring life with it.

This is, after all, the natural order.