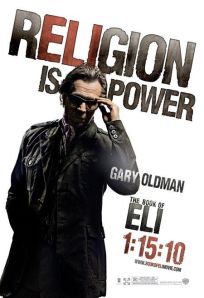 The Book of Eli stars Denzel Washington as a well-armed man carrying the last existing Bible across the United States to a mysterious place of safety. The film sports three slick action sequences, two excellent performances from Washington and Oldman, and one flat-out preposterous twist. Added together, Eli makes for an enjoyable evening, though one that requires either muddled thinking or an exorbitant amount of good will to follow its narrative turns throughout.

The film, marketed heavily in religious circles, is most interesting to me for its treatment of the Bible. Oldman’s villain, Carnegie, says the most about it, often referring to the power of its words to demand control and allegiance of the common people. Washington’s character doesn’t talk about the book as much as illustrate how he uses it—reading it every night and displaying the ability to recite biblical passages from memory. Eli wants the words of the book to have an impact on his own actions, even going so far as to express regret at one point that he hasn’t followed the Bible’s teachings more closely. For one man, the Good Book is a tool to exert power over others; for the other, it serves as a tool for the empowerment of self and others.

Despite this contrast in perspectives between the two main characters, the film presents a unified, Protestant-leaning vision of the role of this book, one that eschews both the importance and the goodness of institutional religion and sets up the individual as the sole arbiter of truth. The only discussion institutional religion comes from the villain, Carnegie, who wants to set up franchises of his degenerate town in other parts of the country. He needs the book to accomplish his plan, but this hierarchical vision is looked down upon. No doubt that derives largely from Carnegie’s evil intentions. But it is of interest that Eli provides no contrasting group, guided by goodness.

Instead, Washington’s hero, Eli, represents a more organic form of spirituality, one that walks the road alone, occasionally meeting with others and experiencing some form of community through random acts of kindness or out of mutual interest. It also matters that the book doesn’t end up with a religious body with an interest in disseminating the book for its spiritual value. Rather, it lands in an institution that seeks to disseminate important texts of all kinds, religious or not.

Watching the film and seeing this more individualistic mentality played out on the screen, I was reminded of a passage from an ancient Christian text, written by Irenaeus:

For [the Church] is the entrance to life; all others are thieves and robbers. On this account we are bound to avoid them, but to make choice of the thing pertaining to the Church with the utmost diligence, and to lay hold of the tradition of the truth. For how stands the case? Suppose there arise a dispute relative to some important question among us, should we not have recourse to the most ancient Churches with which the apostles held constant intercourse, and learn from them what is certain and clear in regard to the present question? For how should it be if the apostles themselves had not left us writings? Would it not be necessary, [in that case,] to follow the course of the tradition which they handed down to those to whom they did commit the Churches? (Irenaeus, Against Heresies 3.4.1)

Irenaeus’s point here is a simple one: the Church is the arbiter of truth, for she protects the message of the book. The Church helps the individual read the book well. The Church reminds the book’s reader that it was not written in a vacuum. Striking out on one’s own leads to danger and misinterpretation. Or worse, to becoming a thief or a robber. Irenaeus understood that just having the book, or even reading the book, was not enough. Those who love the God of the book need the protection of the institution, of the Church, to keep them on track.

My fellow Protestants might rejoice when they see the book saved, which would be, in such a hypothetical world, a good thing in and of itself. But the victory, for this believer, rings somewhat hollow without the institution of the Church to disseminate the message.