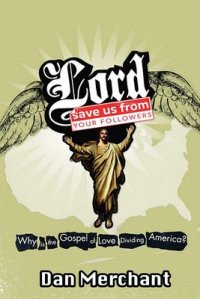 Christians can be jerks sometimes. Or judgmental. Or hypocritical. Or unjust. Or prideful. The list goes on. Some will read the preceding statements and get defensive. Others will think it’s not stated strongly enough.

Wherever you find yourself on the spectrum in your regard for Christians, Dan Merchant, an Evangelical Christian himself, couldn’t get around the negative impression so many seem to have about Christians these days. Public debate and comment involving Christians speaking out on social, political, and economic issues has left behind the more collegial attitudes of yesteryear and replaced them with what can only be termed a toxic atmosphere.

That’s the impetus behind Dan Merchant’s film, Lord, Save Us from Your Followers, which was originally released in the months leading up to the 2008 presidential election in the United States. Merchant acutely points out that people on both sides of the broader cultural debate going on in our country feel oppressed and cornered by each other. As an Evangelical himself, Merchant spends most of his film focusing on Christians, reminding viewers of such foolishness as Pat Robertson’s claim that Hurricane Katrina was a result of the extra-sinful people of New Orleans or Fred Phelps and his demeaning and destructive “God hates fags” campaign.

Merchant is ashamed of the activity of many Christians in the public square, and rightly so. The film seems fuzzy and scattered in its first half as Merchant details the problems, bouncing from scholars to famous personalities to average people on the street. However, the focus narrows in the second half as Merchant advocates for Christians to take a different approach to the world at large. His logic goes like this: If Christians are followers of Jesus, and Jesus was characterized by humility and grace and compassion for all people, then maybe the followers of Jesus should take on a more humble, gracious, and compassionate posture toward all people, especially those that disagree with them.

Merchant peppers the latter half of his film with examples of Christians actively working out this approach in the world today, people like Rick Warren and the lead singer of U2, Bono, who both give a great deal of time and money to various humanitarian works in Africa; a local group of Christians in Portland, Oregon who provide basic services and clothing for the homeless every week; and the filmmaker himself, who sets up a “confession booth” at a festival for gay and lesbian people.

Ironically, Merchant uses his confession booth not to hear the confessions of people at the festival, but to confess his own sins, and the sins of the church at large. The apologies start off a bit awkwardly, but the act of humbling himself through apology provides Merchant the opportunity to have conversations with those who visit the booth. These are revealing moments—two people facing one another in a room by themselves. While Merchant received a variety of responses, his act of humility was clearly moving to many who entered the booth. Fears and trials and hurts bubbled to the surface as human beings shared their hearts with one another.

Christians can be jerks sometimes. Maybe the existence of Merchant’s film in the world will make that a little less common. I hope so.