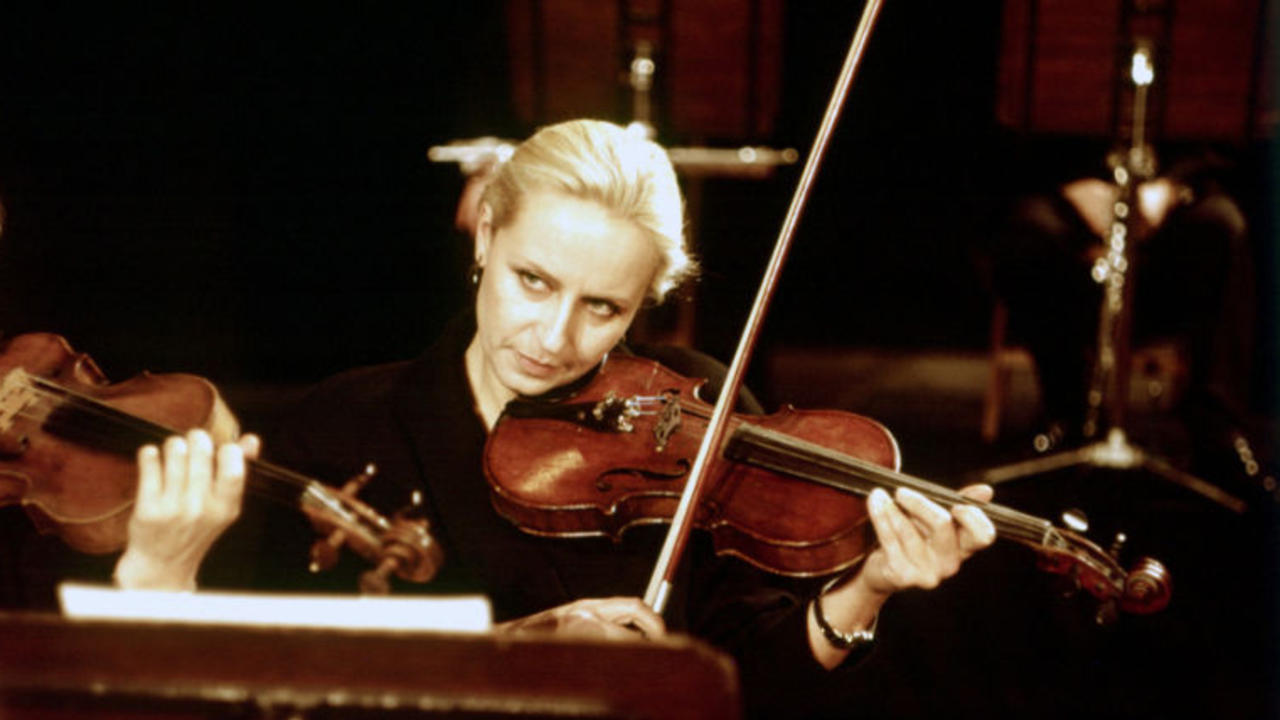 This has long been one of my favorite episodes of this series, initially because of the great ethical dilemma that the story gives us. However, on repeated viewings, the richness of the details has only continued to grow – leading to revelations about the characters and ever more puzzling questions. What follows is a bit of my running commentary through the episode.The initial scene of the film in the doctor’s apartment sets up two intriguing elements about his character. Kieslowski achieves all of this with a mere two lines of dialogue. First, the doctor is surrounded by living things, revealing his care for living things of all kinds. He handles a plant, clearly wondering why it isn’t thriving in his makeshift greenhouse. He wonders what he must do. Next, he flips the cover off of a birdcage, revealing his chirping pet underneath. He then moves across his room, past an aquarium full of fish. And when the doorbell rings, he does not claim the dead rabbit the porter found beneath his balcony (the only verbal exchange in this scene). The doctor then moves to his bathroom, where he leans over the steaming tub, his face in agony. Is he in physical pain? Is there some emotional turmoil that plagues him? Later, he continues a story he has been recounting to his housekeeper – a story about the death of his father, his wife, and his two children. We don’t learn the end until later, but already we see him as a man willing to share himself with others.

Contrast all this with the early scenes of Dorota. When she first appears, she stares out the window, away from the camera. She looks after the doctor as he goes to the elevator, but when he meets her gaze, she abruptly turns back to the window. Kieslowski then gives us a close-up of Dorota extinguishing a cigarette with her shoe. When the doctor returns, Dorota ignores his approach even as he waits for her to speak (she obviously wanted to say something to him earlier). Yet as soon as he goes to his own apartment, she follows him, and rings his doorbell. In their conversation, he recalls her being the person who killed his dog. He abruptly shuns her request for a conference about her sick husband anytime before Wednesday (though he later offers to see her that day), and she responds by wishing she had run over him. Back in her apartment, she listens to messages on the machine without returning the calls. She looks at a hand-written note, which she crumples without answering. After a brief meeting with the doctor in the hallway, she returns to her apartment and rips the leaves from a plant. When she tries to break the stem, she cannot, and it slowly rises. As Kieslowski lingers for a second or two on that recovering stem, we are confronted with the fact that for all our attempts to control life, we cannot.

The doctor then is a man who surrounds himself with life, who is willing to share himself with others in friendship, partly in response to his pain – presumably over the sudden deaths of his family long ago. He can also be impatient and abrupt when put on the spot, though he recovers his sensibilities fairly quickly. Dorota on the other hand is surrounded by images of death – putting out the cigarette and killing the plant. She too is in pain over something, yet her response is to isolate herself. Instead of living things, she is surrounded by cold and impersonal objects. She won’t respond to messages, she destroys a note, she later starts to respond to it but doesn’t, and she won’t address the doctor when he approaches her. She is also controlling, wanting to see the doctor on her terms, not his. She must approach him. She insists on seeing him outside his normal office hours. And in spite of all this, she looks longingly at the pictures of her husband. Does she truly miss him? Is she wishing he is okay? Or maybe she is thinking something else entirely?

This leads to the central conflict of the Episode – Dorota is three months pregnant by another man, and wants to know if her sick husband will die. If yes, then she will keep the baby. If not, then she will have an abortion. At first, the doctor does not know the back story, and he refuses to give her a definitive answer. Later, Dorota follows him home and confronts him in his apartment. She fills him in, at which time he says her husband has only a 15% chance of living. Yet when she leaves, he is grieved, mimicking the motion from the beginning of the film, placing his hands over his face and rubbing it. He then walks to his shelf and looks at the picture of his family. The doctor again agonizes over his loss, but not only that, he agonizes over someone who seems willing to throw away all that he has lost.

But something is sparked in Dorota. Before she leaves the apartment, she inadvertently lights a box of matches on fire while putting out her cigarette, a beautiful image for where this path is taking her. She has visions of extinguishing life, but despite her efforts, she is actually going to see it rekindled. She goes home to find her husband’s friend waiting at her place, with Andrei’s backpack. Clearly, he thinks death is inevitable for his fellow climber, but Dorota reacts violently, clearly believing that her husband still has a chance to live. This means, of course, that she has decided to have the abortion, which we find effectively ends her relationship with her lover.

All this talk about abortion gets the doctor looking more closely at Andrei’s case, in which he sees the disease progressing at a rapid rate. The silent observer present in many episodes of The Decalogue looks on during this scene, with a seeming faint smile of approval. When Dorota visits the hospital next, the observer notices her with Andrei, and as she expresses her love to him, the observer looks away. Is he embarrassed, like he might be intruding on a private moment of tenderness? Does he think her disingenuous? She then visits the doctor for one final update. He informs her that the situation is hopeless, Andrei will die. So she should not abort the baby. She makes him swear, which he does, even though we know his beliefs to be that he never writes off a patient. He has seen too many strange things happen.

The brilliant final sequence begins with a shot of Dorota at her window. The camera is positioned below her, and as it gazes up, we feel the weight of her decision. The camera slowly descends, never cutting, down the building until it comes to the doctor’s window. He is lit in red, and the camera comes even with him. Here we enter into his mind – he has sacrificed his principles, effectively lying to Dorota so she wouldn’t have the abortion. The camera moves quickly to the right, and with a continuous motion with no evidence of a cut (thus connecting all three principles, showing their decisions are intertwined – this functions in a similar way to the apartment building through all ten episodes), we find ourselves in Andrei’s room. He awakens to see a fly struggling to climb out of a glass, which it does. We then cut to Dorota playing the violin with a faint smile, pleased that her husband has been healed. This leads to one final scene change to the doctor’s office, where he and Andrei meet. Andrei tells him that he has returned from a world that was disintegrating and ugly. It made him want to die. Yet now he has life, and his wife is going to have a baby. His question to the doctor is especially poignant: does he understand what it’s like to have a child? The doctor’s response is heartbreaking: with eyes downcast, a reflective gaze, and the look of tears coming to his eyes, he says simply, I do.

This is a tug of war between life and death. There is the tug going on within Andrei. It goes on between Dorota and the baby. It goes on between Dorota and the doctor. And in all these instances, life wins out. The doctor’s painful past reminds us that is not always the case, that death does have its day. But here, even as (and maybe because?) the doctor is forced to go against his conscience, life is the victor.